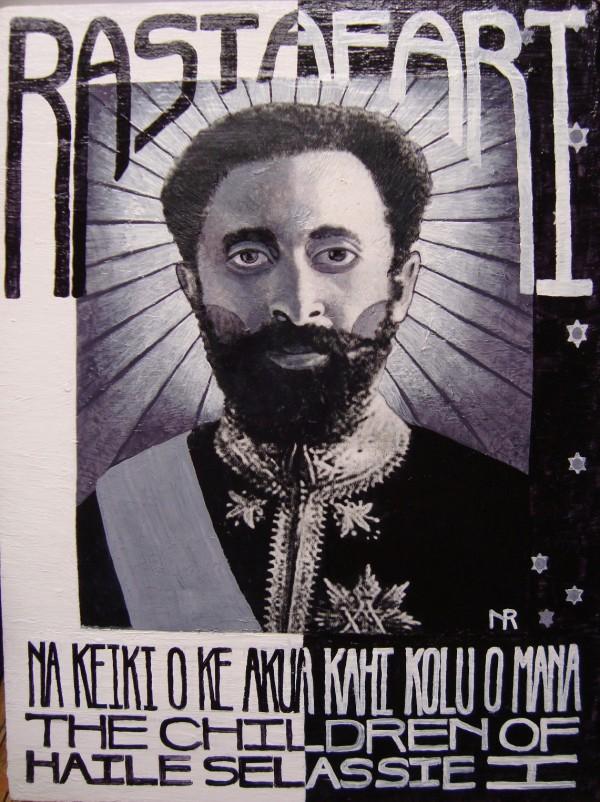 No hea mai 'oe? Where are you from?
Harare Ethiopia ZION

Aloha mai kakou!
It is with great honor and privilege that InI greet the I in the Mighty and Powerful Name of InI God and King, His Imperial Majesty Emperor HAILE SELASSIE I the first, King of Kings Lord of Lords Conquering Lion of the Tribe of JUDAH InI great Shiloh. Greetings in the name of Her Royal Highness Empress Menen I go forth especially to the empresses, may the strength and wisemind of InI King and Queen guide InI.

The Rastafari movement has covered the four corners of the Earth, grown large in number and many branches and houses differ in many aspects. Yet one solid fact binds us all... His Imperial Majesty Emperor Haile Selassie I is the center of InI being. JAH is the nucleus which holds all matter and energy together. On Nov. 2, 1930 Negus Tafari Makonnen was crowned King of Zion, King of Kings, Lord of Lords, Conquering Lion of the Tribe of Judah. Fulfilling the return of the Messiah to sit upon the throne of King David which the Royal House of Solomon is preserved through the Ethiopian line of Kings, by way of Menelik I - son of Queen Makeda and King Solomon. Recorded and witnessed by the world, the Savior has manifested in flesh once again.

InI, Na Keiki O Ke Akua Kahi Kolu O Mana - THE CHILDREN OF HAILE SELASSIE I, have a mission to rise the Rastafari banner in Hawaii, gathering the remnants of His Majesty's children, the Rastafari "those called by His name" and centralizing the efforts of Rastafari here in Hawaii while promoting the over all freedom and liberation of Hawaii's people, especially the kanaka maoli. InI are a centralization of the Hawaii Rastafari, allowing for the inification of all Rastafari transcending house or personal creed or belief, but rather, concentrating mainly on the education, goals, growth, redemption, salvation, and livity of its members as a whole. Working together, to see the vision of our elders bear fruit. InI recognize Ethiopia Afrika as the "cradle of mankind" imparting to all human beings the common blood that stains the Nyabinghi banner with a deep RED alongside the rich GOLD and fertile Green.

Afrika must be free from colonialism and capitalism, as all man and all nations must be liberated from such evils. InI hope to aid in the rebuilding of Afrika as we hope to aid Hawaii gain complete sovereignty from the hegemony she suffers under the current hostile American occupation. InI Rastafari hope to heal the world by living the life Haile Selassie I has set forth for InI by example and divine inspiration. InI Rastafari here in Hawaii give our raspect, honor, and undying gratitude to the ancients, elders, binghi man, bushman, Kings, Empresses, yuteman, and pickney of Jamaica who live and have lived through the conception, persecution, and growth of Rastafari especially in a time where martyrdom was required for InI faith to grow strong in truth, faith, sacrifice, and love. InI seek to inite with all Rastafari of the world, exchanging culture, experiences, and raspect. Rastafari seeks to inite man forward to nature in a familial relationship as the Hawaiians have done so for generations and centuries, "the land is your grandmother, and she loves you". InI extend InI love and friendship to InI kinsmen in JAH by way of the descendants and followers of Abraham, Moses, and Yahoshua the Christ. InI seek peace amongst all spiritual brothers and sisters of all faiths, Eastern and Western, for all of creation belongs to the same one we call JAH.
InI pray that InI RASroots efforts will provide the knowledge and wisemind of Rastafari in Hawaii for generations to come. InI are standing firm and will continue to rise the banner until the day our children are ready and willing to forward the works His Imperial Majesty has set before InI. JAH is a teaching spirit, and He will continue to create, teach, and inspire long after InI have forwarded. Let the hungry be fed, the naked clothed, the sick nourished, the aged protected, and the infants cared for.
LONG LIVE THE KING OF KINGS and His EMPRESS.

HOLY I SELASSIE I JAH RASTAFARI!

Lion Fiyah's Renouncing of U.S. Citizenship and Declaration of GOD KING HAILE SELASSIE I as I SOVEREIGN RULER of THE KINGDOM OF GOD, JAH RASTAFARI represented in my BIRTHLAND by NA KEIKI O KE AKUA KAH

To The Hawaiian Kingdom,
The United Sates of America,
STATE OF HAWAII,
City and County of Honolulu,
and all members of the human family,

I, Keahi Liona also known as Lion Fiyah, with my birth name Ryan James Alika Rodrigues, a descendent of the Kanaka Maoli, the indigenous, independent,… Continue

Pono Kealoha said…
Please add me as a friend ,
Maahalo

The Children Of Haile Selassie I said…
We, THE CHILDREN OF HAILE SELASSIE I, known in our native tongue as Na Keiki O Ke Akua Kahi Kolu O Mana, send our aloha to the Kanaka Maoli who were present at the Ku I Ka Pono rally against the fraudulent State of Hawaii at the Hawaii Convention Center on Friday August 21, 2009. We were pleased, honored, and humbled, to meet with all of you our Kanaka Maoli brothers and sisters. May the strength of the ALMIGHTY be upon us all as we walk through these paths of righteousness. Teach us love and loyalty on Earth as it is in Zion. Blessed heart of love. JAH RASTAFARI!