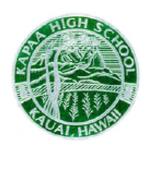 Pride Of the East Side

Ke Kula Ki'eki'e o Kapa'a: Established in 1883 under the reign of King David Kalakaua it was first built directly above Kealia River and then moved up the hill to where it currently stands on Mailihuna Hill. In 1938, after the school was officially declared as a Junior High School and graduated its first 66 twelfth-grade students in 1946.

In 1997, the school was split due to the growing population. On top of the expansion of the Kapaa schools such as Kapaa Elementary School, supporting K through 5th grade, Kapaa Middle School was newly created only a few miles away and was planned to support grades 6, 7, and 8th. Kapaa High School and Intermediate was currently running grades 7 through 12. With the break off the school was now only 9th through 12th grade and renamed simply Kapaa High School.

In 2004, Kapaa High School decided that with the successful regards to Kapaa Middle School's uniform dress code that it would also implement its own uniforms. A line of shirt, jackets and sweaters were created to help create unity and safety at the school.

Kapaa High School is home to one of the original Warriors mascot in Hawaii. The school sports the colors of green and white, which is reflected in the campus buildings, art, uniforms, and banners. Very much like in the University of Hawaii at Manoa, the terms "Warrior Pride" and "We Believe in Our Warriors" have been some of the common catch phrases.

This group does not have any discussions yet.

You need to be a member of Kapa'a High School to add comments!

Comment by Sheridan Collins on October 8, 2010 at 6:09pm
I graduated from Kapaa High School in 1969. People called me Sheri then. Sheri Collins. Now I use my full name of Sheridan.

Comment by LoKAHi on June 4, 2009 at 10:17pm
Try clicking the start discussion link two boxes above.