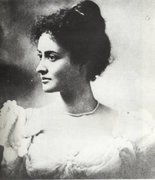 *REMEMBERING PRINCESS KA'IULANI. *HER ROLE IN OUR HISTORY AND THE HAWAIIAN MONARCHY*

"make room for the living": what did she mean? 3 Replies

After watching the movie on her majesty...there was a quote that said to "make room for the living."  Does anyone know if this is a direct quote from her?  Or was it from our Queen?  Or was it from…Continue

You need to be a member of *PRINCESS KA'IULANI to add comments!

I know some things about the Hawaiian story, but I want to learn it all.

where were grandma's supporters when her heart was undermined at what was before her, a young woman with a bright light that began to dim as she realized, the time was not then...I at times share her sadness. I have learned to understand what it means to wait and make room for the living. Hawaii was growing with foreigners with different ways that were pushing her ways aside and at times, indifferences happen but what we wish, we do not do and what we do not wish, this we do. How would you feel watching your country and people becoming strangers in their own land?

Charles Ano has an interesting photograph on his blog which an author has claimed is HRH Princess Ka'iulani, the caption beneath the book photograph reads: "Pa'u parade 1900 - Hold girls (left to right) Lizzie, Agusta, and Ann Princess Kaiulani in heavily flowered pa'u in the middle:

While the date may be incorrect if it is the Princess it looks remarkably like her.

The British surfing museum put up a page on their website last December about HRH Ka'iulani:

Adam Kina'u posted a blog article on the engagement of Princess Ka'iulani & Prince Kawanakoa on the Hawaiian historian blogspot last month which you can access by clicking here:

HRH Princess Ka'iulani's eleventh birthday was in 1886 not 1866 as inadvertently placed below.

Dr. Ralph Kam has written an excellent article in the current issue of "The Hawaiian Journal of History" (No.45) titled: "The Legacy of 'Ainahau: The Genealogy of Ka'iulani Banyan." Please see:

Your local library may now have a copy of same (?) in stock. A couple of notable features:

-The earliest mention of the Ka'iulani banyan planted by her Father Archibald Cleghorn came from a British malihini to 'Ainahau in 1877.

-In 1883 the banyan was mentioned on the occasion of HRH Ka'iulani's eight birthday where a band played beneath.

-In 1866 the banyan was also mentioned on Ka'ilani's eleventh birthday  where she received a painting of the banyan from C.R. Barnfield, the Royal Hawaiian Band played beneath the tree.

-Correspondent Mary H. Krout mentioned the banyan on a visit to 'Ainahau a month after the unlawful 1893 overthrow.

-With the death of HRH Ka'iulani on March 6th of 1899 the banyan became a focal point of mourning by Hawaiian Nationals.

-In March 1904 the "Paradise of the Pacific" gave an account of the banyan. As did the wife of Jack London who visited 'Ainahau three years before the death of Archibald Cleghorn.

-In 1909 Anne G. Winslow wrote to her Mother in a letter describing the beauty of the banyan. Archibald Cleghorn died the following year in 1910.

-In his Will he gave the 'Ainahau Estate to the so-called "Territory of Hawaii" to be used as a public Park by the people of Hawai'i, named in honor of his daughter. He stipulated the Park was to close each evening at 6.00p.m., this time restriction gave the Legislature a justification for refusing the gift according to Dr. Kam and the property was subsequently subdivided and sold & care of the banyan and a small portion of the property went to the Daughters of Hawai'i.

-In October 1921 'Ainahau caught fire and the banyan was greatly damaged though it served as a firebreak in preventing the destruction of nearby residences.

-The year 1949 saw the final destruction of the banyan fortunately at least three other banyans were produced from cuttings of the original.

-Dr. Kam covers extensively the Ka'iulani Elementary School banyan from its 1900 gifting by Archibald to the School named in his daughter's honor to the bronze plaque at the foot of the tree today. Visible from Ka'iulani School is another banyan in the middle of Banyan Street.

-Dr. Kam provides a background to Banyan Court Mall in Kapalama on land once owned by HRH Ke'elikolani, and some four miles distant the King Ke'eaumoku banyan which was felled to widen King Street on October 29th of 1967. The Honolulu Community College banyan was given a branch from this tree where it grew for seven years before being relocated to Magic Island. The history of the Kapi'olani Park banyans are additionally described right up to today's seven trees in the original Park lands. The Royal 'Iolani Palace banyan is also noted it is believed HRH Kapi'olani planted same.

In summary the Magic Island & Kapalama Elementary School banyans are direct descendants of the original at 'Ainahau with the banyans at Royal 'Iolani Palace, Banyan Court Mall in Kapalama, and  Kapi'olani Park all having strong ties to Archibald Cleghorn. In 20 pages and 4 photographs Dr. Ralph Kam embraces a masterpiece of research and diffusion of knowledge worthy of study in the fruition of knowledge as lovely as a tree.

For those interested in researching H.R.H. Princess Ka'iulani from newspapers of old there is a vast resource of information available online.

For example the manufacturer R. Lichlig of 606 Fort Street produced  a souvenir photo button selling at 30c & 50c of Princess Ka'iulani which was a popular selling item following her untimely death from March 8, 1899 when it was advertised in "The Evening Bulletin."

There were 14 people present at her deathbed two days earlier on March 6th, of 1899 at Ainahau, Waikiki.

This opens on the article: "Hawaii newspaper archives go online."

-Below "Select Year" choose "Date Range," a calendar icon opens, with dates from and to, so in the case of H.R.H. Ka'iulani we select the day after death (March 7th, 1899), you can either then click "search" or you can also enter "Princess Kaiulani" into the specific word search and then click on "search."

-If you have difficulty viewing an entire page when you enlarge it click in "PDF" and you should be able to see the entire page with greater clarity.

-The same procedure can be used for other events in Hawaiian Kingdom history, if you play around you can possibly access more precise information more rapidly.

Comment by maori puanani o tahiti robinson on October 1, 2010 at 2:11pm
One dies of a broken heart grows weak on the outsided..many things contributed to her failing health but...foremost is the future of the kingdom that was stripped from under her nose and nothing she tried worked in her favor..worse was when these pride themselves at stealing a whole kingdom without a fight, took the hawaiian flag down and cut it into tiny bits of strips then give it to their young who grew up with that as a memoir of how great America is with its support to developers who used the military to LORD it over the hawaiian nation...and today..it is the same disposition and attitude displayed by the descendents of these greedy entrepreneurs...

Comment by maori puanani o tahiti robinson on October 1, 2010 at 2:03pm
My grandmother was the granddaughter of grandpa Casear Kapa ekeha, the son of my grandma Kamoukuiki, wife of Alapai maloiki, son of my grandma Kanoena, high tabu wife of my grandpa Keawepoepoe..and it is interesting to hear from all of you about grandma Ka'iulani...mahalo