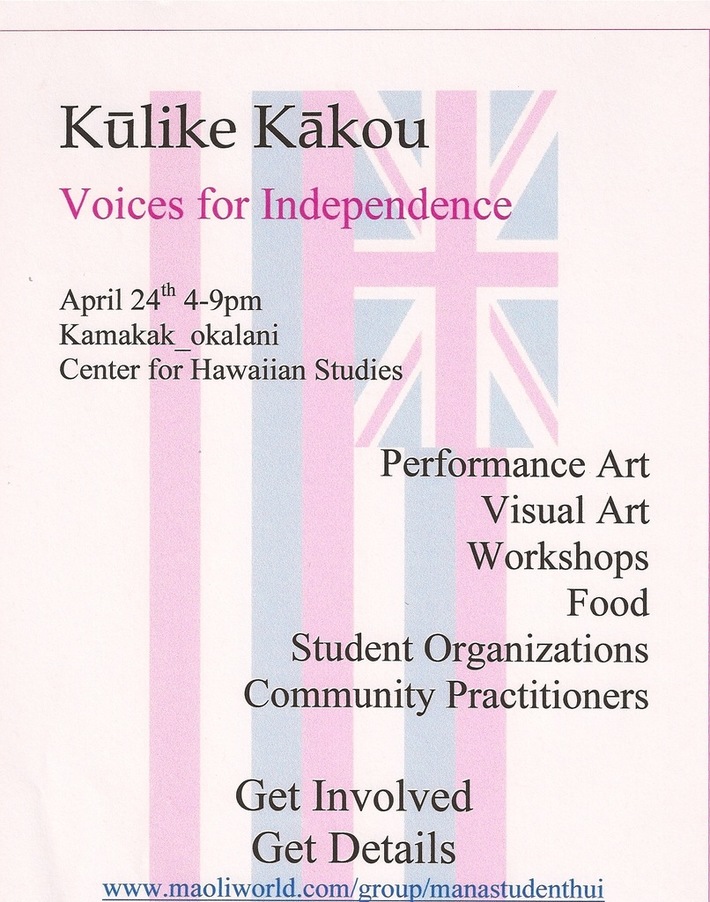 MANA Student Hui has not received any gifts yet

No hea mai 'oe? Where are you from?
Ka Pae Aina o Hawaii

MANA follows in the history of Aloha ‘Āina in Hawaiʻi, and in the tradition of peoples throughout the world who struggle for liberation, freedom, and justice. We value ku’e (resistance); kukulu (creating alternatives); people power; collectivity; community; honesty and integrity; and fundamental human dignity. We agree that an Aloha Aina must be ”guided by great feelings of love.”
Student Statement

We want to bring MANA and its values to the University of Hawai‘i at Manoa. We owe it to those who have come before us to carry on the spirit of Hawaiian activism and resistance, groups on campus who fought for the rights of Hawaiians and all students. We want to bring that mana back because these issues have not gone away, issues such as being underrepresented in the student body and University of Hawai‘i faculty populations. With the current economic crises funding for our Hawaiian studies and Hawaiian student assistance programs are being threatened (as are most departments campus wide), we need to remind them that this campus is built on ceded lands!

We also need to say no and stand up against the duplicitous actions and partnerships of the University, actions and partnerships that affect all of Hawai‘i, because as students we are on the front line. Those actions include partnerships with multinationals which threaten our spirituality and the biodiversity of our islands by patenting and genetically modifying our sacred plants and open air crop testing crops that sustain some of our local economies. Partnerships with the occupying military through such plans as the UARC deal that had no support from UH students and faculty. This occupation continues to be expanded through the University with the recent opening of the Homeland security center (reported in Ka Leo Oct.16-18 issue) who under the guise of disaster response expands the militarization of our Islands. We will no longer be silenced and demand to be heard!

We ask you to please join us in our struggle to stop the hewa actions of our University. We need to bring back that sprit of resistance against colonialism and imperialism, a struggle that dates back long ago but even within the last 100 years with groups like Hui Kalai‘aina and the branches of Hui Aloha ‘Aina who formed out of the need to stop the U.S. annexation of our Hawai‘i, they traveled island wide to collect the renowned Ku‘e petitions against annexation. Or former students and our kumu who struggled for the formation of Kamakakuokalani Hawaiian Studies Center. Who also fought for tuition waivers for Native Hawaiian students. These Kupuna show us that the path of resistance is one that is pono. They have laid the groundwork for us, it is now our time to join the struggle, it is our kuleana and we owe it to them. It is out of this history and these issues that we see the need to form a student group.

Aloha mai Kakou,
things are really coming together for the event on the 24th of April. We have workshops, music, and food should be a great time to network and movement build. We still need help on many things from cooking food (we will provide the food) to making lei for participants. If you would like to help out you can message us on maoliworld, face book us (http://www.facebook.com/home.php#/group.php?gid=60783126183), or email us at aloha_aina@riseup.
Together anything is possible

MANA Student Hui who we are and meeting times

Aloha mai kakou,
Movement for Aloha No Ka 'Aina came to the UH Manoa campus last semester. The idea is to bring the principles held by MANA to campus and revitalize student resistance on the campus. Networking and organizing with other groups archapelago wide is important to us, we also feel as students that it is our kuleana to address and fight the university's collaboration in the occupation of Hawai'i and their role in the poisoning of our 'Aina through such things as the biotech… Continue

MANA Student Hui said…
Aloha mai kakou,
getting down to the wire should be good though been getting good responses.
Just a few last minute announcements
Parking: there are a few options for parking you can park in the parking structure next to Hawaiian Studies the cost is three dollars and there is reentry, you can also park in the parking lot in front of the building make sure you go to the station near the entrance of the parking structure and pay (3$ as well), or there is always the free option park along the road whereever you can find an empty space
Mea to stencil on-part of the aret corner will include stencil making, try to bring things to Ku Like Kakou that you would want to have stencil son an old (or new) shirt, paper, etc.
okay i think that's is about it for now hope to see you all there
malama
MANA Student Hui

Ka ‘Ahahui Lā‘au Lapa‘au said…
Mahalo to you folks for the invite to Ku Like Kakou. We hope to continue working with MANA in the future to advance health for the 'aina and the lahui.

for some reason i can't send you a message either...... but, i would love to be involved at that gathering. Let me check the date with my people and if you had a tentative time... or maybe just the event time. Mahalo nui loa for the invite. You can reach me at 232-9118. Mahalo nui.

NoeGK said…
All MANA members are invited to come and practice some Aloha ʻAina in Waiahole on Sunday morning, Nov 23! Weʻll be going to Uncle Danny Bishopʻs loʻi. Contact me if you want directions.