I am so Happy! My children have land!!!

I'm sitting here drinking my morning coffee and all of a sudden my throat got clogged and tears welled up in my eyes. I was thinking about my children and how far we've come.

I'm a single mother and to say that I've been without struggles would be a complete lie. I've seen my fair of struggles. What compounded those struggles was that I didn't think I'd have anything to leave my children whom I love dearly with all my heart and all my soul. I would die for them if I had to. Still I continued with my daily existence to give them what I could, not materially for we are poor, but I vowed to at least give them spiritually, emotionally, build their self esteem, pray, be thankful for what we do have, a roof over our head (a pretty decent house with a big yard), food, car, money enough for gas and pay the electric bill. I try to fill them with creativity as an outlet and they are creative. And now I've found Maoliworld and my children are on here and although they have their crazy fun with people their age they also seek out the wisdom of Kupuna here on Maoliworld which is something I encourage them to do. This place is a wealth of wisdom and I'm just amazed!

Still there was a heaviness in my heart for I knew that someday, at the rate land was being gobbled up for rich developers and money hungry mongrels, to even have a hope for land and a house they could call their own, they would have to move to Las Vegas or Iowa or somewhere thereabouts just to have a house. So many Kanaka are moving off island for that reason and it was very, very discouraging. We Love the island life, we don't want to move.

I moved my family here from Guam (a place that I Love very much!) because when free land was being given (well you had to pay $50.00) I couldn't qualify because I didn't have Chamorro blood. I didn't get upset or anything but I was a little down because I wanted the land for my daughter. Because I grew up on Guam I didn't really know the extent of the land grabbing being done by the developers and profiteers. I believed that because I was Hawaiian (I know now that I'm Kanaka Maoli) I could get land here in Hawaii (Ko Hawaii Pae Aina). I was sadly mistaken, well not really, I could get land, for 1/2 million dollars. There was always DHHL which in my heart I didn't believe in because it was only for 50%er's and there was extensive research that needed to be done. I began the process of researching so I could apply all the while knowing that the house would be left to 3 of my children but I remained thankful that I had at least that. Now I know it was and is crumbs the de facto throws our way to appease "the natives" (natives = small "n" stands for 50%er's) just like they'll take a Kanaka family to court, the Kanaka family has all their deeds, lawful deeds and Palapala Sila Nui, Palapala Hooko but the foreigner will "win" in court* but to appease the family will take, if the family had 11acres, 7 of their acres and "give" 3 acres to the Kanaka family. B.S. and bola bola! I'm talking about land in Lanai that my ggg grandfather held a Royal Patent Grant (private kuleana) on. I'm in the process of completing my documents and will move forward to give notice to the current occupiers of my family's ownership of the land. There's is also 99 acres from my maternal ggg grandfather which is also on Lanai.

Now comes the time when my silent prayers are met. Here is where I meet the person who, after exhaustive teachings, finally gets me to realize what "koe nae na kuleana o na Kanaka" is. Once I realize what it is I grab it and run with it. Now my children have 2 acres in Honualua (I've included a picture of a map) and 5 acres in Molokai. Will they ever go to Molokai? I doubt it. But hey, we don't do it just to pass land down to our children and future generations, we do it to assist in keeping the development out!

The most recent victory is the Hokulia development in Hawaii. The developers have done gone bankrupt. They cannot get insurance when the title to the land is filled with red flags (palapala koe nae submitted to the currently occupied Bureau of Conveyances). If they cannot get insurance they cannot get the financial backing they need to develop from potential investor's. This is also what happened on Molokai and Hale Mua in Wailuku (even the attorney's went bankrupt).

This is the second time I've heard of something that threatens to take the land away from children, and their children, and their children, land that cannot be sold but can be handed down for generations to come. This is the second time I've heard of someone trying to down grade koe nae and by doing that they perpetuae the development of our lands, the use of our water, and all kinds of activity that is not beneficial to Kanaka and their children. Why would you do that? Why would you try to do something that would stop the progress of something so positive, the most positive action I've ever seen here in Ko Hawaii Pae Aina? Why would someone say it is illegal? It is part of the He Kumu Kanawai, the Constitution set forth by King Kamehameha III that if not for him we probably really would have nothing, no lawful rights, aliens in our own land. Why would you come to one of our classes and stand outside passing out fliers to your meetings and telling people who are attending the class that what is being taught inside is illegal? Why?

That's all I want to know is why? And part of my tears this morning is because I hurt when I know that people, whether consciously or unconsciously are hurting my children. You are hurting them by trying to take their land away and I equate that action with the action of rich developers and profiteers. What is your profit? And how will my children pay for it? 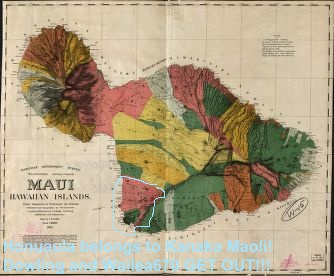 Comment by Charles Ano on July 23, 2008 at 12:33pm
That's wonderful and is a true blessing. You hit it right on the nose. How do these people who protest, profit?