A 1968 report written by UH agronomists document that Agents Pink and Purple were also used on Kauai. I will do some research on what these are later. Also, the report states that these chemicals were mixed together. In one study I read on Agent White, the chemcals did not produce death in sheep individually, but when combined the sheep died. We were all guinea pigs. They had no idea what they were producing or what the health effects were gong to be.

I found the Hawaii Department of… Continue

I have not checked out any of the references made in this article. du.htm

Pacific Integration and What the Army Really Thinks About Native Hawaiians

The southeast boundary of the spray zone is the most accurate - unless they sprayed right over their own lab near the Wailua Reservoir. I just found a PhD thesis that was written in 1960 regarding the bauxite reclamation areas. The writer of the thesis has four areas documented: one at Hanahanapuni, one inside Waialeale, one just to the south of Waialeale and one at another crater just south of Hanahanapuni. All are in the general area of the Wailua River headwaters. I found this info after I… Continue 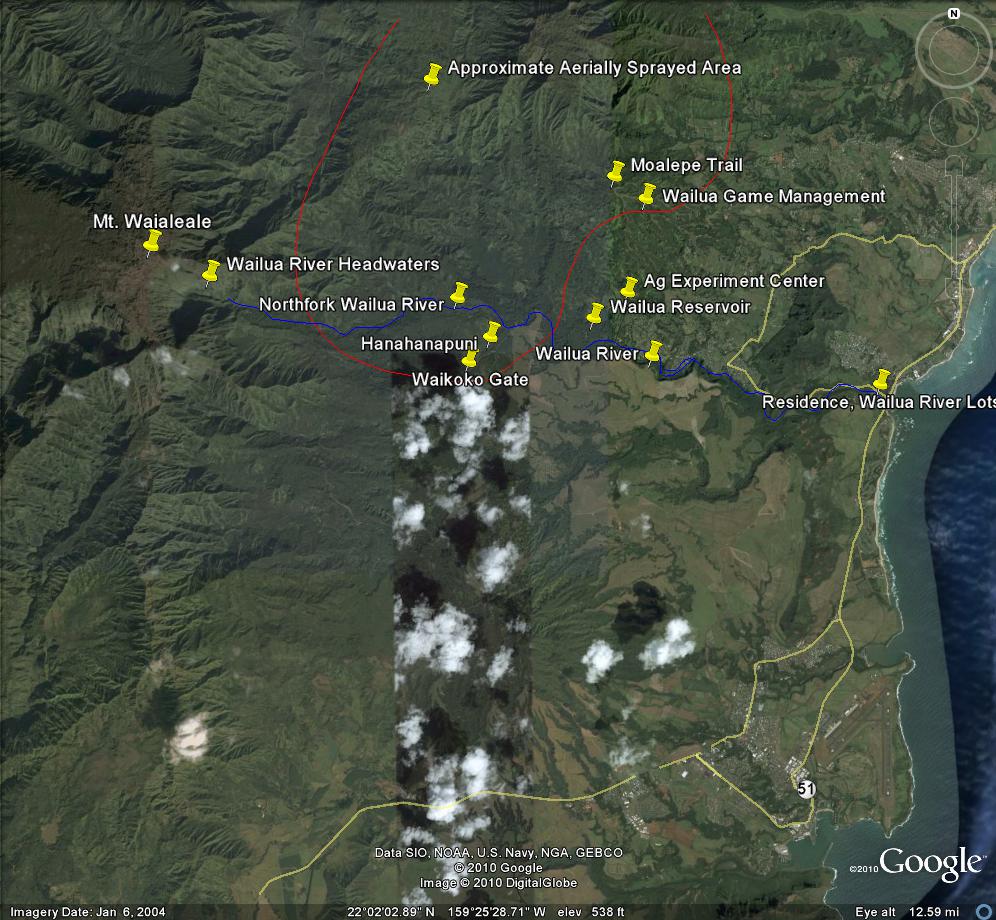 Yesterday I did nothing for a while, then cleaned my room. It was looking like a bad teenager lives in there. I discovered I can get my favorite radio station on the internet. I practice being excited about things like this because I don't take anything for granted. It is the Hopi station from Hotevilla, AZ, Hopi Nation. I spent a lot of years sitting in pickup trucks on construction projects listening to local radio stations. This was my favorite of all time. Where else can you hear a play… Continue

Thank you for posts

I am really tired after these two weeks of discovery. Today I notified two people who I know will be interested in what is going on in Hawaii. One was instrumental in getting a large well established pulp mill closed down in Eureka, California. The other is a person who became very ill in Hawaii while doing his internship there. I do not know the years. Both are medical doctors. Perhaps they will have ideas concerning the best way to combat the poisoning of Hawaii.

I am writing the… Continue

I will try to cite all reference documents, web sites, etc. ASAP. I have bookmarked every site and all government documentation I have found and will list them soon.

Sometimes I think the chaotic tourist industry is a smoke screen for the US military machine. As if the whole place is a strategic desirability. In 2003, I decided I was well enough to venture up to Alaska for the construction field season. While I was there I learned that nuclear grade concrete missile launching sites… Continue

For days I have been doing nothing but trying to figure out what went on above my house in Wailua in the 1960s. I'm getting closer.

Between 1967 and 1968, the University of Hawaii in collaboration with the Department of the Army (Fort Detrick,… Continue

Yesterday I learned that many herbicides were developed and tested by aerial spraying on Kauai in the 1960s. I spent years in Wailua River Lots. I have been extremely ill since I was a teenager there - progressively more ill every time my health relapsed. From the research I did last night, I learned that aerial spraying took place on Hanahanapuni which drains directly into the Wailua River. We had a canal in our backyard that came off the Wailua River between our house and Coco Palms Hotel. I… Continue