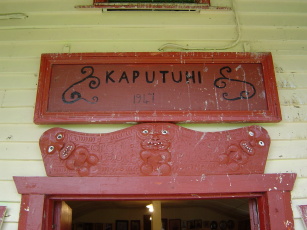 Paul Meredith has not received any gifts yet

No hea mai 'oe? Where are you from?
Ngati Kaputuhi - see www.kaputuhi.org 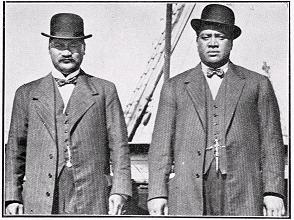 In 1914 The Fourth Maori King Te Rata (on the left) and company travelled to England to petition King George V in relation to Maori grievances. The party stopped off at Hawaii for several hours on the 21st April. The King’s Private Secretary, Mita Karaka (on the right), recorded:

“Arrived at Honolulu at 4.15am. Doctor board at 6am, passengers lined up for examined (sic) at 6.30am. All passed. The most prettiest little harbour in the East. Water is calm throughout the year. Passengers land at 9am. Ko Te Rata anake o matou i te Tima [Te Rata was the only one of us who remained on the Steamer]. Went on a motor ride to Pali and back to town. Full of all nations especially Japs. George & I met the Mayor of the City who is a Hawaiian. Very sorry for no reception. Visit Queen Lil[i]uokalani. Very old 75yrs. A fine big palace. Went with Mayor on his car all over the Island. Visit the Aquarium. Saw all coloured fishes, most beautiful. Visit Waikiki, a surfing beach. Visit oldest church 96 yrs and forts. Maoris took a lot of interest in us. Some visit Te Rata on boat. Very sorry they did not had (sic) any news, especially the Mayor penei [was like this], we would have the time of our life…

Nui atu te mihi kia matou [Great were their greetings and salutations to us]. Begged us to stop until next boat. Our boat was timed to leave at 4.30pm. Ko nga whare kai na nga Japs. [The Japanese owned the restaurants]. We had to pay 50 cents for our lunch equal to about 2/1 English money. Bought a fountain silver pen 5 ½ dollars. Wahines selling Lei in streets. The Mayor, myself & George only had about 3 minutes to wait when we got to the boat. We were decorated all over with flowers by the Hawaiian womans [sic] and the Mayor and the Scouts gave us a Hawaiian haka. The Hawaiian Royal Band was also there playing the most loveliest music band that ever played. He tino pai aroha ana [It was beautiful].

Kaati tino nui te aroha o te Mayor ki to matou wehenga. Ki tonu te waapu i te Maori me te Pakeha i poto katoa mai nga tangata o te taone ki reira. [Great was the affection of the Mayor with our departure. The wharf was packed with Hawaiians and Whites. All the people of the township had gathered there.] Even some of the business places were closed. Talk about our send off. In Auckland is nothing equal to this. Hui hoki ki nga Pakeha me te Kuini te pouri mo to ratou korenga i whakaaturia. Ee tenei te Kingi o te Iwi Maori o Niu Tireni kei te haere atu. Haunga te Mayor, i tino heke ana roimata mo taua ahua. Kaati i poto rawa taua taima i kite ai ia Te Rata engari ko aua mihi he nui. Ahua rite ana ano ki matou reo. Heoi e tino ki ana au ae tino whakaae ana hoki au ki te whakatauki a nga Pakeha mo taua moutere. Ko te “Paradise of the East”. [The whites and the Queen were also disappointed that they were not told –the King of the Maori people of New Zealand was on his way. The Mayor indeed lamented that circumstance. His time he saw the King was short but great were his salutations. Their language is similar to ours. I can say that I most wholly agree with that English proverb about that island – the “Paradise of the East”]. It is a most pretty and magnificent place for its size. Population about 50,000. Ko te nui o nga Japs [the Japanese number] 30, 000 and is a great place for a motor car there is about 1500 motor cars driven by Maoris, Japs, Chinaman, Koreans, N____ and Whites [sic]. And the charges are 4 dollars an hour = to 16/8. Streets are very narrow and the traffic sign is “Keep to the right”. Town well laid out & clean with all their vegetations looking green and also Palm tress growing all along the streets. And the fire escape station is reckon to be the finest in America. It is gonesome. Just as boat leaving about 20 or 30 Hawaiian boys jumped into water diving for coins thrown by passengers and I tell you they can go some. They followed us till about ½ mile out, and so the above is the whole sights I saw of Honolulu and its beauties this day the 21st April 1914.
Alohanui”

Noelani said…
Hey Paul,
Well, I think when we originally conceived of this panel, we were considering commenting really on your project, but as you and I never really exchanged sources, I have not been in that conversation---so at this point, no, I don't really have any idea about what I would discuss. If Kamaoli is still working on some of your stuff, perhaps you should replace me with him?

OR we need to get together soon, and figure out the shape of this panel and see if there's a piece I can carve out to contribute in a constructive manner. Who else is on the panel besides you, me and Kea---this might help me figure something out....
Aloha,
Noe

Noelani said…
Hey Paul,
So the Minnesota conference is just around the corner, and I was wondering if you have any ideas for what you want me to discuss regarding maoli-maori? Is Kamaoli still working with you on some stuff?
Thanks,
Noe

I don't think I'm going to have the translations ready for about two more weeks. I'll send you what I have soon, but I still have about five more articles to go in addition to cleaning stuff up. Right now I have about eight of them roughly translated, but I need to clean. I'll send those early next week, hopefully monday.

I actually had not seen that yet. This is great. I looked around the website and the booklet was attached to a rezoning request by a descendent of Baker. The rezoning map shows that the farm is less than a mile from my Mom's house. I'm going to try to get in touch with that guy and see if they have any more info on Baker and maybe sources for that pamphlet.

I'm not sure how polished a translation I'll have by the end of January. This is the first long translation I'm doing, and Baker tends to get sorta metaphorical and sentimental at times.

Thanks for getting everything together. I'm sorry I haven't been more help but I'm running around getting things ready for the PHA and working on funding for next year. The roundtable sounds good.

Ku`ikalono said…
Paul, running out of time, I think your suggestion that Alice & I should talk about the larger project (if she's willing) and some of our mana`o about its potential promise and possible problematics. Then, if you and Kea are working on something together, that's good. Could we put Noelani and Aroha on the Roundtable list as well? I'll relook at your description - could I make editorial suggestions?

Ku`ikalono said…
I'd love to sit on a Roundtable on Maoli-Maori. Please count me in. Also, I think if you need this to be research, like a panel w/ a paper, I can cook something up. Is Alice up for a Roundtable and/or panel?

Kea said…
The panel sounds good. I can get you the submission info for my paper sometime at the end of the week.

Ku`ikalono said…
Aloha e Paul. Sorry to have been so out of touch - I don't get to Maoliworld often enough during the crazy teaching semester. I'm contemplating panels and the abstract you circulated. Looks like a good start. Any folks reply?