Origins of Surfing began in Peru!!??

I found this guy's website while I was looking at surfboards.  He has a theory stating that Surfing didn't originate in Hawai'i, rather, it originated in Peru! I found this very hard to believe and have emailed the owner at info@softsurfboards.com and found the guy to be what I would call "anti" Hawaiian and went as far to say we didn't event anything.  This is very offensive to not only Hawaiians and our culture but surfers as a whole.  Very sad...and this guy is using his claim to profit his business. Not to  mention in my email conversations with the guy (which I will post later), I found out that he's not even from Peru, but he's Scottish.  Read the below text on the website and tell me what you think.

Here's the text and a photo of their "surfboard": 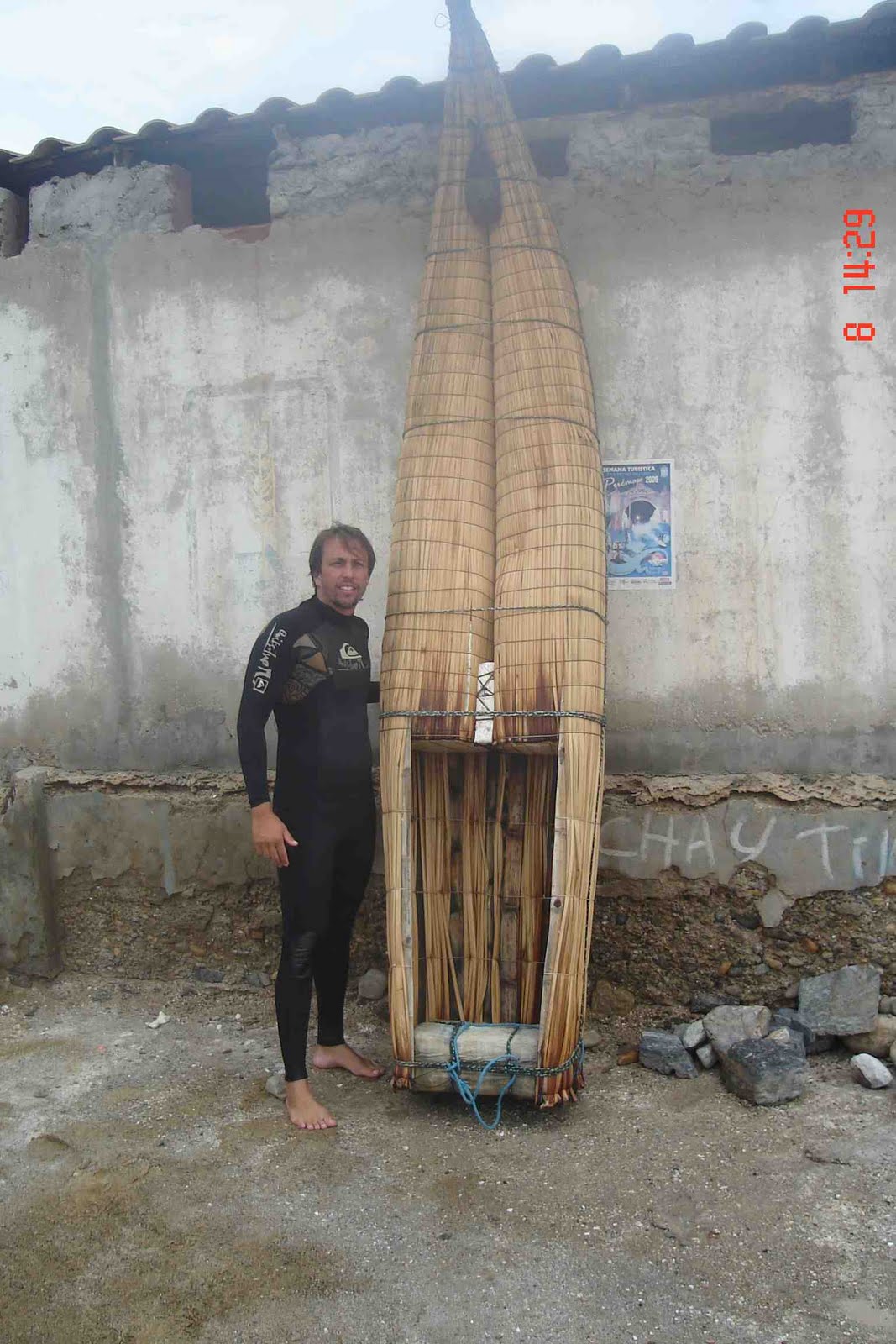 Modern scientific archaeology indicates, as many Peruvians have long claimed, that surfing may have been invented on their north Pacific coast by pre-Columbian cultures using reed boats to surf the waves. These boats are similar in shape to surfboards but are made from the hollow, buoyant reeds of a plant. Pottery from as early as 1000b.c. unearthed in Peru shows people wave riding. For those who think surfing was invented in Hawaii keep in mind no one lived on the Hawaiian Islands until 300-750AD or at least 1500 years and possibly 2000 years after surfing has been confirmed in Peru. To be certain, Peru has the oldest archaeological and cultural evidence in existance. Additionally, it is clear that the lineage in Peru originates in the Pre-Incan past 3000 years ago. It continues to the present in both the ancient and modern forms. As proven by archeologists this tradition can be traced back to 1000bc. Surfing is depicted on ceremonial vessels of the Viru Culture, an antiquity of 3000 years, where you can clearly see a man standing aboard a little reed craft, surfing.

It is known that Polynesians surfed. This was witnessed to be very similar to its modern form by European sources, such as Captain Cook, during his explorations less than 300 years ago. Because it was so deeply rooted in their culture, it is safe to assume that it had been taking place before then, however, we cannot be sure as there is absolutely no physical evidence in Polynesia like that found in Peru.

This means that the earliest surfing in the world, with actual physical evidence, took place in Peru. There is no anthropological or archaeological evidence for a Polynesian origin of surfing before the mid 1700s AD.

The man known as "The Pioneer of Modern Surfing" is Duke Kahanamoku, was a Gold medal winning Olympic swimmer and brought surfing into the public consciousness in the form it is currently known. Without his influence surfing wouldn't have become the well known sport it is today.

The modern Peruvian's Inca ancestors called the Kontiki´s, fishing along the Peruvian coastline, first rode the waves in the Pacific Ocean. Huanchaco is a village along the Peruvian coast in which, even today, the local fisherman use the reed canoes called "little reed horses" to ride the waves.  A link to this ancient Inca past is evident as "modern" Peruvian fishermen stand on the tails of their "little horses made of reeds" and ride the small boats to shore after a long day of fishing.

The reed is a cultivated crop.  Planting it is similar to planting rice: one must cut the roots and deposit them in the muddy bottom of a lake. The first harvest can be done after 12 months, and the reed can be harvested about three times a year. Peasants harvest it using a sickle on a 1.5 meter (5 feet) stick, cutting it at that depth below water. Once it is harvested, the water in it (comprising 90%) is dried out and it can even be fed to cattle.  There is historical evidence of a floating reed bridge, used by the Incas, in the chronicle of a battle during the Spanish conquest.


But there´s a lot more surfing than just history to be found in Peru near Huanchaco.  Chicama, with a rideable break almost a mile long on good days, is just around the corner from Huanchaco. In total there are 6 good spots in the 100 mile coastline between Trujillo and worldclass surf spot Pacasmayo in the north. The wave quality and consistency make Peru  truly a surfers paradise and is the ideal surfer's hang-out.  Surfers in Peru design, test and make every Liquid Shredder®  surfboard using skills and traditional quality developed for over two thousand years.

No surfing did not start in Peru, and the mecca is in Makaha!  but need to also do Kaupo in Maui search first .  The point is riding the waves and standing, plus no forget the tree of where the board came from.  I am sure recreation is a factor in surfing.  Was peruvians enjoying their lives, or under severe oppression?

I believe not excepting his 'talk' until he shows his pottery is what is important to this posting.  One has to challenge the words that are being spoken and showing up on cyberspace.

We have been challenging the Anglo talk and the Pacific Island men talk for a long time, it's time for one to get beyond excepting the anglo talk.  More like dress-up lies in their reconstruction of history!

Permalink Reply by Kaohi on July 15, 2011 at 12:49pm
Check out the Kontiki theory about we or us guys originated by theory and currents of the water.  At one point, in your mind one would have to say that your DNA originated from here because your tupuna said, E' Hawai'i Au!

Permalink Reply by Bronson Keali'i Kalipi on July 16, 2011 at 11:13am
Brah, Hawaiians lived here 6000 years ago.  They found bones that carbon dated back 6000 years ago.  So remember this, these islands was here from the begining of man kind.  Do your research in Hawaii before you use someone else theory.

I put this on the forum good luck:

My boyfriend ( husband) was a northshore surfer and I was attending Kailua High School in 1964.  We attended a lot of surfing movies that was being produced, specifically Endless Summer.  Back then, the producer R. Paul Allen had to narrate his movie for us.  He was a pretty funny and interesting person, much of what he said as we watched the film at Roosevelt Cafeteria is pretty much what's in the the move today.

The surfers back then that I got to know was Bobby Cloutier, Filipe Pomar, and Barry Kanaiaupuni.  Barry, Leslie and I went to the same high schoool. Later our girls went to the same school too.  I still see Peter Cole at meetings on the northshore.  Duke Kahanamoku was also a part of my life in Waikiki.  Ronald Cloutier, Bobby's brother was like a brother to me and we hung out together. His father was Chubby Roland and the Backyard Gang.

The Vietname War entered my life on May 13, 1968 and my life turn to shit!  The Phil Edwards got stored and we all turned ugly.

Post 911, I did a mural project of Hawaiian Women surfing in the 1800's for I am a ceramist.  I was trying to give back to our community as well as heal from the whole 911 ordeal.  I tried to share the importance of Hawaiian women surfing.  They were naked ofcourse because kapa did not last in the water, nakedness was not a shame.  It was frustrating because I did not get the support at all from the native Hawaiian leaders because they were naked!

I did the mural because I wanted to confront the film makers of 'Blue Crush' with their stealing of our native Hawaiian women surfing and replacing it with chicano and haole women.  So I got into a lot of hakaka in trying to strighten out the history truth and the Hollywood version.

The naked truth, Filipe Pomar is a good salesman he can sell you a piece of the moon from personal experience.  From what I am viewing on youtube, I believe that is what the Peruvians Haole's are trying to do.  Cross check with Peter Cole, he is the oldest living I believe from the Duke Kahanomoku Surfing meets in Makaha.

Save Our Surf (SOS) was started in late 1964 by John Kelly, Jr. as a protest organization when plans were unveiled by the Army Corps of Engineers and the state of Hawaii to "broaden" the beaches of Waikiki. Using old fashioned political techniques- hand-bills, demonstrations and colorful presentations at public meetings - SOS quickly developed strong grassroots support in the community at large and expanded to mobilize forces from the community for confrontations with the establishment in the era of "people power"[1].

The principal spokesman for the group was John Kelly. As described by Kelly in 1971, the SOS strategy was based on three simple concepts: respect the intelligence of the people, get the facts to them and help the people develop an action program.[2]

Save Our Surf was instrumental in preventing offshore development around the Islands and saving 140 surfing sites between Pearl Harbor and Koko Head.

John Kelly, Jr. died on October 3, 2007 [3]. Some of the work of SOS is continued by the Surfrider Foundation, for instance the Save Ma'alaea campaign.

Permalink Reply by Dustin Kaneloa Keaweehu Stitely on July 22, 2011 at 6:17am
Well, for me, if you look at it from a third person point of view.  The Peruvian "Surfboard" is more of a canoe or kayak.  It's made out of reeds too.  It does not resemble a surfboard which is a solid. The ancient Hawaiian surfboards, which I have seen in the vaults of the Bishop Museum, are solid and resemble what we now know as surfboards.  I don't believe that just because somebody stands up on some floating object and rides a wave that it is considered surfing.  The board should at least be similar to what we know as a surfboard.