Pirate's Eyes on Hawaii:  The United States Tariff History Posted in 1897 with Evidence of Depression/Bankruptcy

Pirate's Eyes on Hawaii:  The United States Tariff History Posted in 1897 with Evidence of Depression/Bankruptcy

Researched and Reviewed by Amelia Gora (2020)

The following shows the Economic status of the United States and special articles showing that the United States lacked finances and secured funds by pirating, pillaging funds through the illegal usurpation of Queen Liliuokalani in 1893.

U.S. President Grover Cleveland knew that the legitimate government was the Royal government and moved to give Hawaii back to Queen Liliuokalani and removed the United States Flag when he left office in 1897.

U.S. President William McKinley supported the usurpers and had his Army, Navy, and Federal workers "develop" a Territory of the United States, later changed to Territory of Hawaii which operated under the American Empire.

The following shows evidence of a bankrupt nation, a nation in a depression since 1892:

The United States was in a Depression in 1892

The following article shows the United States Tariff History - the Status of the U.S. was in a depression, and not in good financial shape.

Americans in Hawaii also assisted in funding the U.S. in the American Civil War (1863 - 1865).  U.S. President Abraham Lincoln was the President at the time.

In 1884, Bernice Pauahi Bishop died.  Her banker husband, an Alien named Charles Reed Bishop assisted the planners, and were conspirators, treasonous persons.  See article IN THE LAND OF POI in the references below.

The small article showing that U.S. President Cleveland removed the American Flag in Hawaii and U.S. President McKinley had it put up again is documented in this article also.

1898 - Lies were presented to the people and the World about Hawaii being Annexed.  There was No Annexation.

1940 - Hawaii paid the highest amount of monies to the United States for taxes. 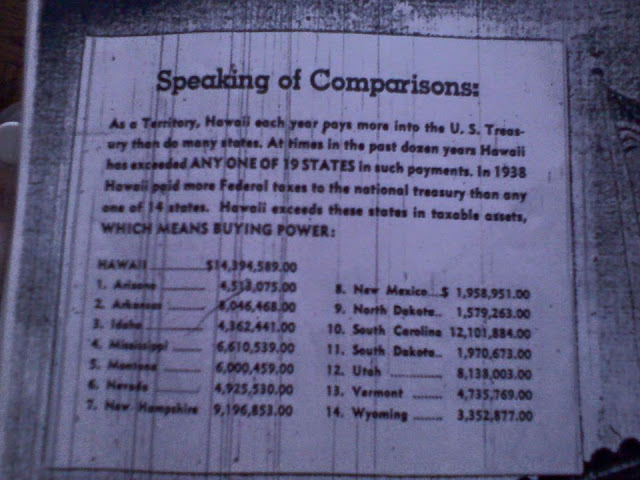 The following are important excerpts of the above article:

"WASHINGTON (AP) - Now it can be told--what happened during the longest of three secret Senate cessions, during the Spanish-American War, a debate over whether to take over Hawaii."

"The debate of nearly three hours on that day - May 31, 1898 - and in two secret sessions the previous month had remained locked up until last week.  Then at the request of a historian who noted gaps in the Congressional Record, the Senate passed a resolution authorizing the National Archives to take the wraps off the debate transcript."

"The government's only explanation for the long suppression of the debate records is that they had been long forgotten."

"THE SECRECY WAS clamped on during a debate over whether to seize the Hawaiian Islands - called the Sandwich Islands then - or merely developing leased areas of Pearl Harbor to reinforce the U.S. fleet iat Manila Bay."

"PEARL HARBOR, ALREADY UNDER LEASE, Stewart argued, wouldn't be much use until costly dredging operations opened the entrance channel. "Either we must have the Sandwich Islands," he declared, "or the administration must recall Dewey."

"THE UNITED STATES ANNEXED the Hawaiian Islands five weeks after that debate.  But before the Senate reopened its doors that day, Morgan steered the discussion back to Cuba, the original cause of the war with Spain."

"The first secret session, April 25, 1898, involved technical and emotional debate over wording the declaration of war and why it or some accompanying resolution did not formally recognize the independence of Cuba or at least declare the Cubans to have the rights of belligerents in the conflict."

"THE SENATE ENDED UP BY ACCEPTING the House passed version reading that "war and the same is hereby declared to exist and that war has existed since the 21st of April" - four days earlier."

"Dropped from the final declaration was a Senate proposed tagline requiring the administration to "prosecute said war to a successful conclusion."

"Sen. Stephen White of California joined the unanimous vote for war "even with that mild prevarication" about when the war started."

Note - The following Lies are documented in the above article:


U.S. debate on whether to take over Hawaii occurred five (5) years AFTER taking over
Hawaii, a neutral, friendly, non-violent nation in a planned move since 1840.


PEARL HARBOR WAS UNDER LEASE

ANNEXATION OF HAWAII WAS A LIE

2000 - March 12.  In the article "Justice memo shows U.S. never legally annexed Hawaii" by Steven T. Newcomb, page B3, from THE HONOLULU ADVERTISER:  The U.S. Supreme Court documented that  no annexation legally occurred in 1900.

The claim by the U.S. about Annexation of Hawaii was a lie.

The U.S. became a Pirate Nation when U.S. President McKinley became the

The U.S. is documented as in a Depression during the time of U.S. President

Cleveland's second term in office or 1893.

Oct 03, 2019 · U.S. President Cleveland Gave Hawaii Back to Queen Liliuokalani Twice (2x), With Legal and Researched Information Showing The Existence of the Kingdom of Hawaii Review by Amelia Gora (2017) The following are important facts, issues reveals …

Explore the references shown above, share, keep as evidence of the criminal deceit,

criminal wrongs, conspiracies, and know that our kanaka maoli did no wrong.