Overview of "U.S. President Cleveland Gave Hawaii Back Twice in 1894 and 1897 With Political Cartoons of the Period"

Overview of "U.S. President Cleveland Gave Hawaii Back Twice in 1894 and 1897 With Political Cartoons of the Period"

The following is an important Overview of Why the Kingdom of Hawaii continues to exist and remains a legal Constitutional Monarchy in the Hawaiian archipelago today:

1893 -  'President's Policy of Restoring the Queen' - Several parts of this article points it out. Question. Colonel, what do you think about Mr. Cleveland's Hawaiian policy?

Answer. I think it exceedingly laughable and a little dishonest —with the further fault that it is wholly unconstitutional. This is not a one-man Government, and while Liliuokalani may be Queen, Cleveland is certainly not a king. The worst thing about the whole matter, as it appears to me, is the bad faith that was shown by Mr. Cleveland—the double-dealing. He sent Mr. Willis as Minister to the Provisional Government and by that act admitted the existence, and the rightful existence, of the Provisional Government of the Sandwich Islands.

When Mr. Willis started he gave him two letters. One was addressed to Dole, President of the Provisional Government, in which he addressed Dole as "Great and good friend," and at the close, being a devout Christian, he asked "God to take care of Dole." This was the first letter. The letter of one President to another; of one friend to another. The second letter was addressed to Mr. Willis, in which Mr. Willis was told to upset Dole at the first opportunity and put the deposed Queen back on her throne. This may be diplomacy, but it is no kin to honesty.

In my judgment, it is the worst thing connected with the Hawaiian affair. What must "the great and good" Dole think of our great and good President? What must other nations think when they read the two letters and mentally exclaim, "Look upon this and then upon that?" I think Mr. Cleveland has acted arrogantly, foolishly, and unfairly. I am in favor of obtaining the Sandwich Islands—of course by fair means. I favor this policy because I want my country to become a power in the Pacific. All my life I have wanted this country to own the West Indies, the Bermudas, the Bahamas and Barbadoes. They are our islands. They belong to this continent, and for any other nation to take them or claim them was, and is, a piece of impertinence and impudence.

So I would like to see the Sandwich Islands annexed to the United States. They are a good way from San Francisco and our Western shore, but they are nearer to us than they are to any other nation. I think they would be of great importance. They would tend to increase the Asiatic trade, and they certainly would be important in case of war. We should have fortifications on those islands that no naval power could take.

Some objection has been made on the ground that under our system the people of those islands would have to be represented in Congress. I say yes, represented by a delegate until the islands become a real part of the country, and by that time, there would be several hundred thousand Americans living there, capable of sending over respectable members of Congress.

Question. In your experience as a lawyer what was the most unique case in which you were ever engaged?

Answer. The Star Route trial. Every paper in the country, but one, was against the defence, and that one was a little sheet owned by one of the defendants. I received a note from a man living in a little town in Ohio criticizing me for defending the accused. In reply I wrote that I supposed he was a sensible man and that he, of course, knew what he was talking about when he said the accused were guilty; that the Government needed just such men as he, and that he should come to the trial at once and testify. The man wrote back: "Dear Colonel: I am a —— fool."

Question. Will the church and the stage ever work together for the betterment of the world, and what is the province of each?

Answer. The church and stage will never work together. The pulpit pretends that fiction is fact. The stage pretends that fiction is fact. The pulpit pretence is dishonest—that of the stage is sincere. The actor is true to art, and honestly pretends to be what he is not. The actor is natural, if he is great, and in this naturalness is his truth and his sincerity. The pulpit is unnatural, and for that reason untrue. The pulpit is for another world, the stage for this. The stage is good because it is natural, because it portrays real and actual life; because "it holds the mirror up to nature." The pulpit is weak because it too often belittles and demeans this life; because it slanders and calumniates the natural and is the enemy of joy.

Political Cartoons of the Hawaiian Kingdom/Kingdom of Hawaii

Uncle Sam gets first dibs on the "oyster sandwiches," or Hawaii, before Japan and other countries. 
Uncle Sam catches the ripe apple that says "Hawaii" in his hat at the right time. In the background, John Bull, a personification of Britain, shakes his fist. 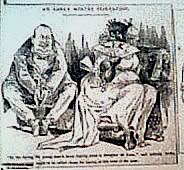 1894 - U.S. President Cleveland Gave Two Letters to Willis:  (1) for Sanford B. Dole and (2) Instructions to Willis to Put Queen Liliuokalani Back on the Throne. 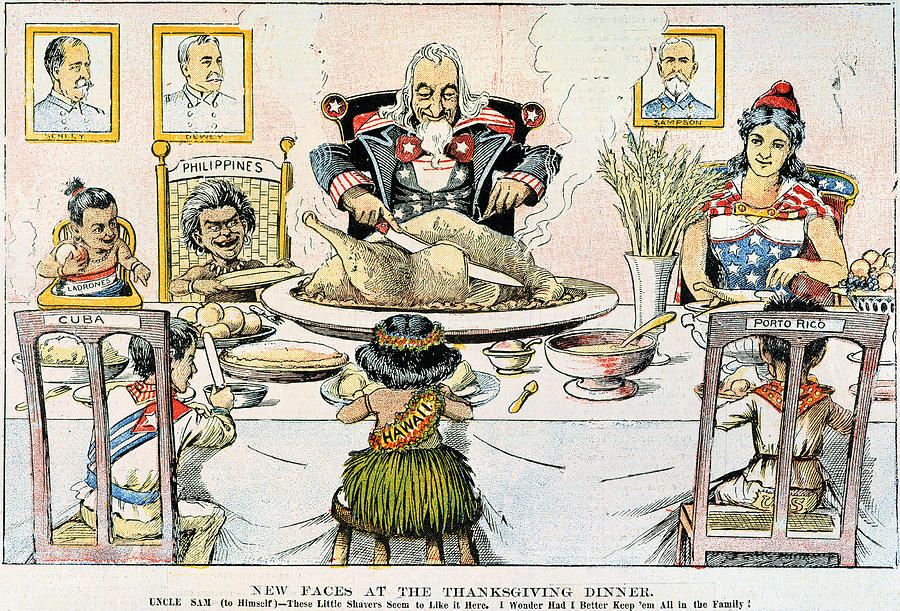 WASHINGTON, Feb. 20. -- That the Federal Government, which is supposed to be after the trusts, is making large contracts with them and paying them the people's money, was charged by Representative Hitchcock (Dem., Neb.) in the course of a vigorous criticism of the army and navy expenditures in the House to-day.

The article at the beginning shows discussions of Mr. Chandler, an attorney who was available to be interviewed and it sounds like a good argument; however,  Lack of information by Mr.  Chandler about the Premeditation efforts made prior to the planned dethronement of our Queen changes the whole discussion, changes the whole legal conclusion.

Under the 1849/1850 Treaty of the Kingdom of Hawaii and the United States  of America, the issues of piracy, pillaging, theft, etc. is covered under Article XIV.  Persons who moved to do such things were to be prosecuted, imprisoned, and the country who they came from would be contacted and that country would have to remove their citizens from the Kingdom of Hawaii's properties.

The persons involved in the Treaty of one of the most favored nations called the Kingdom of Hawaii/ Hawaiian Kingdom were only Kamehameha III - Kauikeaouli, his heirs, and successors, and the U.S. President Zachary Taylor.

U.S. President Benjamin Harrison was in collusion and aware of the Premeditation efforts of pirate individuals who moved to dethrone our Queen Liliuokalani.  His Vice-President Levi P. Morton was also in collusion because he was a banker who returned to his bank after not being re-elected.  He was an expert in international bank transfers and then sold his bank to the J.P. Morgan bankers.

It appears that the Vice-President Levi P. Morton took part in the theft of Hawaiian monies and was an international pirate.

The U.S. Gold was at an all time low.

Premeditation of assuming a neutral, friendly, non-violent nation has been documented.

Queen Liliuokalani and her people were under stress, duress, usurpation, coercion and confronted with an armed military made up of 162 armed men with gatling guns, etc.

1849/1850 Treaty of the Kingdom of Hawaii and the United States is a permanent friendship and amity contract between two (2) solvent nations.

The Provisional government was made up of the 1/3 part of the Hawaiian government who were treasonous persons.  Their positions were temporary, voted in positions.

They were in "political possession of the Territory of Hawaii, all the government buildings, revenues, and the properties thereof".

They also obtained support from foreign representatives who were also under stress, duress, usurpation.

They were not the persons who signed into Treaties with the Kingdom of Hawaii,

All lands of the Kingdom of Hawaii are either alodio to only kanaka maoli or fee simple to aliens.

This means that the government buildings are part of the Alodio lands of the Royal Families.

A U,S. Representative asked to borrow monies from the Kingdom of Hawaii - Kalakaua's reign and was denied because it would take more than a thousand years to repay.  The U.S. Representative intended to pay only an interest each year and he was denied.

The point of all of this is that U.S. President Cleveland did Give Hawaii Back to Queen Liliuokalani in 1894 and 1897.  Also, Premeditation, Conspiracy, Piracy Nulls and Voids all the wrongs that were done by the usurpers and the U.S. involvement in defending the pirates, pillagers, racketeers documented were illegal, and the pursuit of crimes by U.S. Presidents shows international piracies and the failure to adhere to their own U.S. Constitution from 1850.

Additionally, William Chang, Retired Professor of the John Burns Law School has also found that the claimed annexation was all lies.  See:  http://blog.hawaii.edu/aplpj/files/2015/09/APLPJ_16_2_Chang.pdf

Darkness over Hawaii: The Annexation Myth Is the Greatest Obstacle to Progress

Political Cartoons of the Hawaiian Kingdom/Kingdom of Hawaii

U.S. President Cleveland Gave Hawaii Back to Queen Liliuokalani Twice(2x), With Legal and Researched Information Showing The Existence of the Kingdom of Hawaii

COUNTING THE WRONGS........... or Problematic issues affecting the Kingdom of Hawaii/Hawaiian Kingdom Today

IOLANI - The Royal Hawk: Some of the Best Articles by Amelia Gora

iolani-theroyalhawk.blogspot.com/2016/09/some-of-best-articles-by-amelia-gora.html
Sep 24, 2016 - Keep for the Records with other articles - Amelia Gora-Kanaka Maoli . ... A pirates life for me Watching Pirates, Parasites, etc. in the Hawaiian ...

THE DARK FORCES OF THE ONE WORLD ORDER EXPOSED or ...

maoliworld.com/.../the-dark-forces-of-the-one-world-order-exposed-or-the-pirates-of
Sep 22, 2017 - News from the Hawaiian Kingdom: Brief Pirate History In The . ... 7) I, Amelia Gora did find the article showing that U.S. President Cleveland .

https://www.opednews.com/author/author4145.html
Articles - Author's Page for Amelia Gora - Opednews.com Progressive, Liberal ... Identity theft,Piracy(ies) are the reasons behind the criminal assumption of our ...

News from the Hawaiian Kingdom: Links to Articles by Amelia Gora ...

hawaiiankingdomnews.blogspot.com/2015/.../links-to-articles-by-amelia-gora-and.ht...
Oct 2, 2015 - Links to Articles by Amelia Gora and others ... More on the Fake State/the Illegal Occupiers/the Pirates/Pillagers Attempting to Validate Their ...

theiolani.blogspot.com/2016/08/kingdom-of-hawaiihawaiian-kingdom.html
Aug 25, 2016 - My name is Amelia Gora, the Acting Liaison of Foreign Affairs of the ... United States of America, article XIV applicable to pirates, pillagers, etc.