U.S. Sen. Daniel Inouye said today that an agreement has been reached with Gov. Linda Lingle on a native Hawaiian federal recognition bill.

The new version of the bill would still grant sovereign authority to native Hawaiians prior to, rather than after, negotiations with the federal and state governments on land use and cultural issues. But it would allow the state to maintain its ability to regulate for health and safety issues and make clear that members of a new Hawaiian government entity are not immune from criminal prosecution. Lingle had objected to granting Hawaiians sovereign authority prior to negotiations, but is satisfied with the state protections in the new version.

Inouye said he is scheduled to speak to the White House about the new version tomorrow. The Obama administration had backed granting sovereign authority to native Hawaiians prior to negotiations so Hawaiians would be treated similarly to federally recognized American Indians and native Alaskans.

Inouye, D-Hawaii, said he hopes the bill can now come to a Senate vote this month.

U.S. Sen. Daniel Akaka, the bill's main sponsor, has been pushing for a vote this year and was urged by Inouye and others to act quickly because time is running out before the November elections, which could change the political composition of the Senate. The bill has been pending in Congress for a decade and has stalled because of opposition from Senate Republicans who see it as race-based discrimination.

Akaka informed state Attorney General Mark Bennett on Friday that he and Inouye had accepted the amendments to the bill.

Bennett said today that the amendments would allow the Lingle administration to once again support the bill.

Permalink Reply by Tane on July 9, 2010 at 2:39am
Bottom-line is the pushing of the U.S. WASP racist ethnocentric doctrines of Manifest Destiny with the usage of the fallacious Akaka Bill. I would encourage all to write to the U.S. Congress-people to tell them to vote NO to this disingenuous bill.

When the Hawaiian elitists over-ride the wishes of the Hawai'i nationals, subjects and citizens of the belligerently occupied Hawaiian Kingdom, we know that corrupt behavior doesn't represent our voices for freedom, justice, and democracy. The U.S.' shame and dishonor will never be cleansed unless it restores the Kingdom of Hawai'i and de-occupies our territory. The U.S. has a lot of making up to do in setting things right.

God Bless the Hawaiian Kingdom; we already know where the U.S. is headed.

I already signed the petition like how my kupuna signed the Ku'e Anti-Annexation Petition. Unfortunately they did not listen to our kupuna then :( so hope that other Hawaiians who vote in American elections contact their senators directly

and tell them directly to vote No on the Akaka Bill.

Permalink Reply by Pomaikaiokalani on July 9, 2010 at 10:50am
ALOHA Kaua, e Ululani, I don't worry about the AKaKa BILL. It's in violation of the Constitution of the United States. I've signed so many Petitions against the AKaKa BILL and testified on it. So now I just move on with my life as a Hawaiian Kingdom National Royalist of the nation of Queen Liliuokalani. I am so tiried of hearing the Same Old Stories dealing with the Overthrow. As I believe that there has been lots of information out there on the Overthrow. Presently I'm working with the making of the "No Treaty of Annexation" Memorials. Have you thought of submitting your Kupuna names for the Memorials? I'll be printing about 25 of my Kupuna names on the Memorials. We, HIAA and KLMA Hawaiian Civic Club will be working on adding 600 more names to the Memorial for the July 31 La Ho'iho'i Ea Celebration. If you have submitted your Kupuna names let me know and I'll take pictures of them and send them to you. Mahalo nui no kou ALOHA , e Ululani.
Long Live The Hawaiian Kingdom, o Pomaiokalani, Hawaiian Kingdom National Royalist 1993 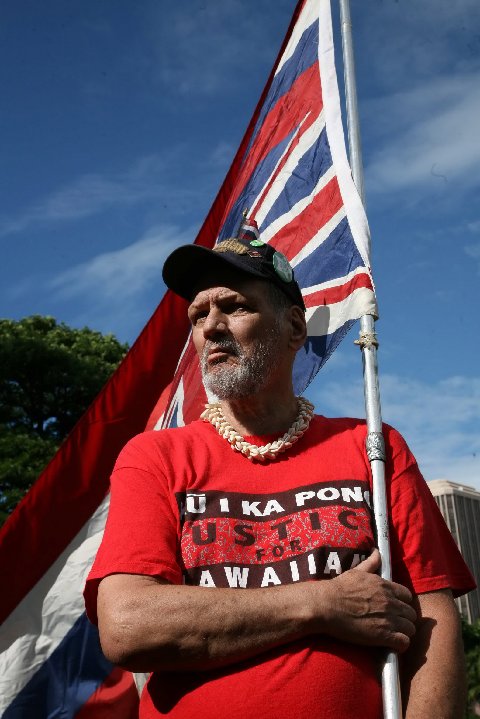 Yes my twin sister Lisa asked Pono to do it.

Rachel Lokinihama Among
She was 20 years old.

Can you see this?

Permalink Reply by alice smile on October 12, 2010 at 9:38pm
I don't know much about the spirituality in this context, 70-262 but I consider the flag symbolic that serves also as an identifier for people who think alike or have the same dreams. I already posted my mana`o regarding the flag and below you find it again. Many flags in history were used for inspiring people and to identify certain groups or causes without being official flags of any government.70-089 Let this flag continue to symbolize the wish of the Hawaiian nation for independence, sovereignty and solidarity. And to answer your question if the flg is claiming to be representative of any form of government entity now or in the future,70-238 I can say that flags don't claim to be anything, rather people or organization claim a flag to be theirs,70-241 and as for now,