Hawaiian Kingdom Facts: Report of Military and Associates Activities in the Hawaiian Islands and U.S. Barren of Gold! Compiled by Amelia Gora (2017)

The following shows a Chronological History of the Military/Army Activities in Hawaii:

Report of Military and Associates Activities in the Hawaiian Islands

The Confederate Officers had fled from the United States after the War and were found by the Union Officers and Federal officials.

They were told that they had two (2) choices:

(1)  Work on assignments with the United States, or
(2)  Be imprisoned

A United States Representative asked to borrow money from the Kingdom of Hawaii during the time of King David Kalakaua and he was refused.

The United States was already in debt to a number of nations.

England Not on the side of the Kingdom of Hawaii.  Along with the United States, they too lost a lot of money in funding the both sides of the American Civil War.
England suggested that Annexation should occur after the death of Queen Liliuokalani: 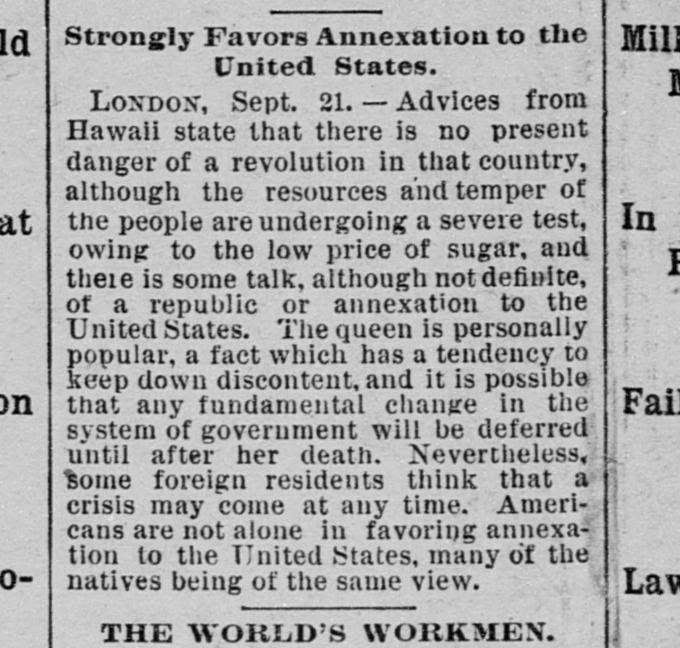 The following article shows the bankrupt status of the United States:


The following shows a Chronological History of the Military/Army Activities in Hawaii/ about Hawaii:


1893 -  The U.S. President Benjamin Harrison, a former American Civil War General made the suggestion that  'a plebiscite be given to give the appearance that it was the people's decision to have a change in government'

1897 - U.S. President Cleveland Gave Hawaii Back to Queen Liliuokalani and had put it on record.

President Cleveland Gave Hawaii Back to Queen Liliuokalani before he left office, and having full knowledge that 40,000 subjects were against Annexation...
Reference:  President Cleveland Gave Hawaii Back to Queen Liliuokalani https://docs.google.com/leaf? id= 0B6Gs4av5Se1wN2JkZjMxMzEtMDIyN i0...
Also see at:  http://query.nytimes.com/mem/archive-free/pdf?res=9406E5D6153AE733A...
the new President McKinley ignored Queen Liliuokalani who maintained that she was the Queen and did Not legally abrogate the Constitutional Monarchy government ....her legal name was Liliuokalani Regina - Latin word for Queen....and she was forced to sign Liliuokalani Dominis; she was under stress, duress, usurpation, and coercion;
Reference:  http://amelia-gora.blogspot.com/2016/10/the-truth-about-our-queen-l...

1898 -  U.S. President McKinley Proclaimed the Republic of Hawaii to be the Territory of Hawaii.
1901, etc. -  Non Alodio/Allodial persons, not related to the Royal Families conveyed Pearl Harbor lands, etc. to the U.S. Navy and other military in Hawaii.

Note:  Recently in 2017 - The criminals who were the Bishop Estates/Bernice Pauahi Bishop Estates/KSBE Trustees, etc. who criminally claimed that they were the owners.deeded lands to the U.S. Military, etc.  The current trustess are perpetuating frauds, deceit, criminal claims and  They should be arrested.

For starters, two trusts the Bernice Pauahi Bishop Estates/KSBE Trustees, and the Liliuokalani Trust/Queen Liliuokalani Trust Trustess should also be arrested because both Trusts were served legal notices and defaulted in answering the Legal Notices, etc.

Rent/Billings for Rent was made and Filed according to law, Kingdom of Hawaii law and made in accordance with the Most favored nation status of seven (7) days....they/the Trustees have well passed the seven (7) days notices, and Notices were also served via the Post Office, return receipt requested to the Trusts, and U.S. President Donald Trump, et. als.

Additionally, some of our Konohiki and Assistant Konohiki also delivered and served the Notices while obtaining stamps from the offices, etc.

1929 -  Former Judge Bailey recorded that Hawaii's land laws were "alodio in fee simple" a manipulation of Alodio/ Alodial titles and Fee Simple to Aliens were merged into one phrase making everyone think lands in Hawaii were Fee Simple.

RIMPAC and the Military Occupation of Hawai'i - The Red Nation

www.hawaiiankingdom.org/
Dr. David Keanu Sai lectures on the illegal and prolonged occupation of the ... as the HQ's for the largest of the nine unified military commands of the United ...

hawaiiankingdom.org/pdf/HRC_Sai_Report_(Gumapac).pdf
May 23, 2016 - 19 David Keanu Sai, A Slipperty Path towards Hawaiian Indigeneity: An ...... The Hawaiian Kingdom came under military occupation on August ...

https://hawaiiankingdom.org/.../smithsonian-exhibits-hawaiis-occupa......
Oct 29, 2016 - Dr. Sai's exhibit is the American occupation of Hawai'i seen through the lens ... government in 1893 followed by the military occupation during the Spanish-American War. ... The Matrix star Keanu Reeves is a cousin of Dr. Sai.

Keanu Sai Doctoral Dissertation: "The American Occupation of the ...

www.sun-nation.org/sun-hawaiian-david-keanu-sai.html
David Keanu Sai, Chairman of the Council of Regency of the Kingdom of ... on treaties between Hawaii and other nations, and military occupation and the laws ...

https://en.wikipedia.org/wiki/Hawaiian_sovereignty_movement
The Hawaiian sovereignty movement is a grassroots political and cultural campaign to gain ..... DavidKeanu Sai and Kamana Beamer are two Hawaiian scholars whose ... Sai has done extensive historical research, especially on the treaties between Hawaii and other nations, and on military occupation and the laws of war.
2000 -  Claim to Annexation of Hawaii Illegal.
See articles, posts by William Chang, former Law Professor of University of Hawaii at Manoa and article below: 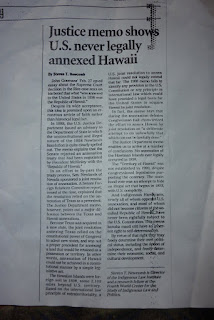 https://www.hirono.senate.gov/.../senate-passes-defense-bill-that-i......
Dec 8, 2016 - “From securing nearly $300 million in military construction funding to ... The final bill included a provision to allow for the repair, recapitalization, ...

https://www.hirono.senate.gov/.../hirono-secures-hawaii-priorities-......
Sep 15, 2016 - The bill authorizes over $12 billion in funding for the Army Corps of Engineers, andsupports water infrastructure projects across the country.

damontucker.com/tag/mazie-hirono/
Senator Mazie K. Hirono today marked Equal Pay Day by introducing the Science, ... The STEM Opportunities Act helps federal science agencies and institutions of .... The four military service academies are: the U.S. Air Force Academy, the ...... $350 a day, this growth in visitors could also yield an estimated $573 million for ...

https://ballotpedia.org/Mazie_Hirono
Based on analysis of multiple outside rankings, Hirono is an average Democratic .... TPA, also known as fast track authority, allows the president to negotiate trade ..... This is less than the average $10.2million spent by Senate winners in 2012. ... [show]U.S. Senate, Hawaii, 2012 - Mazie Hirono Campaign Contributions.

www.thenewamerican.com/freedomindex/profile.php?id=H001042
This bill (S. 2943) authorizes $611.2 billion for military programs in fiscal year .... The federal government ought to cover veterans' healthcare costs but allow ...... which administers the program, could start spending the second $350 billion ...

www.hawaiibusiness.com/trumps-effect-on-hawaii/
Mazie Hirono Sen. ... Hirono notes that Trump's anti-immigration policies will be another risk for Hawaii, ... That program allows some undocumented immigrants who entered the United .... “There's an issue as to how we're going to pay for the over $350 billion increase in military spending over the next four years,” she says.
2017 - Tulsi Gabbard:

https://en.wikipedia.org/wiki/Tulsi_Gabbard
Jump to Military service (2004–present) - Tulsi Gabbard is an American politician and member of the Democratic Party who has been the United States ...

https://gabbard.house.gov/about/about-tulsi
Tulsi Gabbard spent her life growing up in beautiful Hawai'i. ... of the Hawaiʻi Army National Guard—this time to serve as the Military Police Platoon Leader.

https://gabbard.house.gov/
Tulsi Gabbard's Telephone Town Hall on Hurricane, Disaster Preparedness ... Learn about the U.S.Military Academy nominee process and how to apply for a ...

Tulsi Gabbard Is Not Your Friend - Jacobin

https://www.jacobinmag.com/2017/.../tulsi-gabbard-president-sanders......
May 26, 2017 - Hawaii representative Tulsi Gabbard is the new progressive darling. ... Gabbard has since done a 180, citing her military service in the Middle ...
SUMMARY
The move to assume a neutral friendly nation the Hawaiian Kingdom has been ongoing since the time that the mercenaries./ American mercenaries/missionaries arrived in 1820.
Tracking the Army in the Hawaiian Islands shows the continuous move by Aliens to assume a wealthy nation is documented through the former military officers, assistants, etc.
Premeditation, Pillaging, conspiracies, treason are part of the ongoing moves to assume a neutral, friendly nation that did no wrong.
The move to pillage, pirate our lands, assets, gold, titanium/minerals, water, etc. continues but can be seen by characters who push "Military occupation", etc.
Fraud vitiates all claims and all contracts.
Hawaii should really be on the list of the 53 nations documented as False Flag Operations.  See:

www.washingtonsblog.com/2015/02/x-admitted-false-flag-attacks.html
Feb 23, 2015 - There are many documented false flag attack
Keanu Sai's move to Steal the Kaai soon after he retired from the Army gives suspicion to his activities over time.  He needs to be arrested.
His push for Military Occupation, and War with the Spoils of Wars issues are maneuvers, calculated maneuvers in further confusing, defrauding the Alii and kanaka maoli, and undermines the Truth found over time which shows Premeditation, Piracy, Pillaging, etc.
Piracy, Pillaging, etc. is documented in the 1849/1850 Treaty of the Kingdom of Hawaii and the United States of America, Article XIV.
Keanu Sai/D. Keanu Sai/David Keanu Sai and the identity thieves Trustees are to be arrested because of the criminal activities documented.
The Treaty involves only the Sovereign Kamehameha III, his heirs and successors and the United States of America President.
Kamehameha III - Kauikeaouli's heirs and successors are his Royal Families and Not the Identity Theft entity set up since 1897 by U.S. President McKinley who was assassinated shortly after his claim to Annexation was made.
The 1871 Bankers Constitution was illegal (See Karen Hudes articles, you tube videos).
The changeover of the United States of America to two nations:  United States, and American Empire occurred in 1899, more than 50 years after the permanent treaty does not apply to the contractual agreement between two (2) nations:  the Kingdom of Hawaii and the United States of America.
The U.S. Constitution documents that the Treaty supersedes State, Federal Laws and is the Supreme Law of the land.
Pirates are amongst us, and includes Army, military, and Federal personnel operatives who fraudulently maintain illegal claims and cannot fail to follow rules or law or can be proven to be barbarians in nature, contrary to our status of most civilized nation since the time of Kamehameha III - Kauikeouli our ancestor.
Keanu Sai/D. Keanu Sai/David Keanu Sai along with the Identity thieves Trustees, etc. are on record to be arrested.
Additionally, the Military in the Hawaiian Islands owes rents for lands fraudulently conveyed by the identity thieving Trustees who are Not the Alodio/Alodial land owners.
The Trustees, et. als. are legally squatters on our Royal Families lands.
aloha.

Peacock vs. Republic of Hawaii (1899), HAWAIIAN REPORTS, Honolulu, Oahu, Hawaiian Kingdom, and other cases which shows case precedence in the Hawaiian Islands

Posted by hwnwahine at 4:41 AM

Share far and wide!...........check out Barrack Obama's ancestor Robert E. Lee also....who was an heir of George Washington whose wife Martha held stocks in the Bank of England! .....only in the Hawaiian Kingdom...infiltrated by Pirates, pillagers, genocide activists, etc.! ............