The Hawaiian government, the Hawaiian Kingdom is made up of Three (3) Parts:

The Kamehameha's, the Royal Families minus the Treasonous, Sellouts such as the Bishop's - Bernice Pauahi Bishop and husband Charles Reed Bishop, Cleghorn's, the Kuhio's and Kawananakoa's. 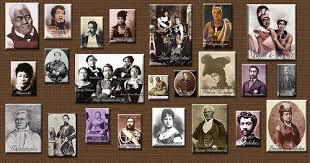 2)  House of Nobles - Heirs and Successors.

3) The House of Representatives:

A Non-permanent, voted in portion of the three part government.  This part was made up of Non- Royal Family members, those who were interested in government, were foreigners who wished to be part of the government, etc.

Presently, kanaka maoli and other descendants of the subjects of Queen Liliuokalani are the true part of the House of Representatives.  Many of those not affiliated, associated with "Sovereignty groups" and are practicing their sovereign rights, returning to their lands, etc.

The usurpers, those who created duress, stress, usurpation, coercion, intimidation, occupation, racketeering, pillaging, pirating, etc. on our Hawaiian government, our Queen, our subjects and friends continue to wrongfully occupy our Hawaiian Islands.

Note:  this is the group that premeditated, planned to dethrone Queen Liliuokalani in 1893.

Queen Liliuokalani referred to the Provisional government and being neither de jure nor de facto.... reason being that it was an entity and could not call itself a government because it was a treasonous, conspirator part of the recognized government which was a Monarchy, Constitutional Monarchy government with Permanent branches making up 2/3 of the whole.

The entity was supported by a non-Monarchy government called the United States which did usurp it's own citizens in 1871.

The Treaty of 1850 with the Hawaiian Kingdom and the United States of America is a permanent, friendship treaty which also supports the rights of Americans in the U.S. Constitution, and not the banker's Secret U.S. Constitution as exposed by Karen Hudes, World Bank's Whistle Blower.  See:  https://maoliworld.ning.com/forum/topics/new-world-order-background... and https://maoliworld.ning.com/forum/topics/updated-chronological-hist...

See Rex vs. Booth case, HAWAII REPORTS for legal information/explanation of our government.

See the following articles for dates of recognition of the Hawaiian Kingdom which was recognized since 1810 by Kamehameha as the head of our Monarchy government, documented recognized in 1842, 1843, and 1844, etc.:

December 19, 1842
Independence of the Hawaiian Islands acknowledged by the United States of America.

April 1, 1843
Independence of the Hawaiian Islands acknowledged by Great Britain.

November 28, 1843
Independence of the Hawaiian Islands guaranteed by England & France.

March 26, 1843
Independence of the Hawaiian Islands guaranteed by Belgium.

And this coincidental date is maybe just an FYI;
January 17, 1779
Capt. James Cook arrives at Kealaokeakua (Kealakekua).
And we all know what happened on -
January 17, 1893 at Iolani Palace.

The Hawaiian Government, the Hawaiian Kingdom, Ko Hawaii Pae Aina, He Mokupuni Pae Aina o Hawaii, Hawaiian Islands, Hawaiian archipelago exists because the Kamehameha Families, the Royal Families who are automatically members of the Hawaiian government as soon as a family member is born.

The Treaty of 1850 with the Hawaiian Kingdom and the United States of America supersedes all State laws, Federal laws and the heirs and successors of Kamehameha III - Kauikeaouli exists.

Those who pretend to be our representatives are no different than the usurpers, conspirators who made themselves pirates, pillagers which means although some of the arguments made by Keanu Sai, et. als. are somewhat true, not fully true, they are Not part of our Royal Family members and have not been given authority to move as if they are the Hawaiian government.

Mega fraud has been uncovered and the criminal deviants are documented pirates, pillagers in the Hawaiian Islands and exposed for the World to see.

Our Royal Families exists and we maintain a peaceful, neutral, friendly, non-violent nation which was also maintained by our ancestors.

We are not the ones who have done wrong and do not support the use of our families monies, the Hawaiian Kingdom monies to be used as war support, and have documented the facts of treason, conspiracy(ies), Tribunal results in accordance with the 1850 Treaty of the Hawaiian Kingdom and the United States of America invoking Article XIV.

The American Consulate needs to be in Hawaii to take care of their own, remove their pirates, pillagers as documented in Article XIV of the 1850 Treaty of the Hawaiian Kingdom and the United States of America, and others who claim to be the Hawaiian government, etc.

Well, well everyone.......Henry Noa's people 'confronted' me by the picnic table outside of the Bureau of Conveyances and said that many others were sending them messages, etc. They were the ones from Maui.........just happened that I was talking with one of my cousins who had also attended OHA's meeting and he too knew about Henry Noa and the move to go to Switzerland,.,,,,, and cousin is credible alright.,.....a retired policeman/detective.............so to you non believers......i say "wop your jaws" .......we talked a bout a whole lot of other things......including Bumpy Kanahele's recent lands that he received and heard about his multiple new trucks amassed recently....... btw my other cousin will remain as a person who divulged the info first............
as for someone who CLAIMS they are from Kalima et. als.s .........prove it.........Our Kalima had three children... she was the last wife of Mataio Kekuanaoa.......oh btw Kekuanaoa's oldest son from Kinau (w) was Moses Kaikioewa the one who attended the Royal School who was reprimanded, abused (and even killed!? by the missionaries as stated in oral history)......
The name Paalua was also used by Kalaimoku/Kalanimoku according to the missionaries, the criminals the thieves the animosity filled foreigners.......yet his oldest son was named Paalua/Palua and early wife Kalehua/Kalua. Reference: RULING CHIEFS by Samuel M. Kamakau
Henry Noa originally was with Dennis Ragsdale and Company,,, seehttp://www.pixi.com/~kingdom/
Dennis Ragsdale and Company started Their government in 1998, and Henry Noa was one of their 'teachers'. They had clashes/differences and Henry Noa moved on to form his own government.
If anyone was truly interested in the starting points of various 'groups', 'governments' you'll need to ask and do a timeline of each............
The following is our families, the Kamehameha families, Kamehameha II's families, Kamehameha III's heirs, descendants timelines if anyone's interested:
Kamehameha - recognized in 1810 as a Monarchy Government, Russia also recognized the Hawaiian archipelago.
(as posted to the President Obama, I, Amelia Gora am one of his descendants/heirs through his son Kaoleioku; Kauikeaouli/Kamehameha III; Kalanihelemaiiluna Paki; and Kanekapolei (daughter);
Kamehameha II - Liholiho had seven wives: Kekauluohi, Pauahi, Kinau, Kamamalu, Liliha, Kapule, and Pali. Pali was married to Antonio Silva/Silveira and had many children including our Keo/Keo Silva/Jeo/Joseph aka's. Our family descends/are heirs of Pali's oldest son.
Kauikeaouli/Kamehameha III's son Opunui is our ancestor.
Kalanihelemaiiluna was the father of Abner Paki(father of Bernice Pauahi Bishop); and Kalaniulumoku (our ancestor).
Kanekapolei 2 - daughter of Kamehameha and Kanekapolei is another ancestor thru her marriage to Nuuanu from whom our genealogies were verfied by Kanai Kapeliela, State genealogist, and recognized for the Waikiki burials. Nuuanu was the nephew of Kamehameha and son-in-law. His father Mahihelelima was the kahu of three (3) wives of Kamehameha: Kaahumanu, Kaheiheimalie, and Namahana/Piia. Mahihelelima was the sibling of Kanekapolei who was married to Kalaniopuu (another ancestor of ours) and Kamehameha (our multiple lines ancestor)
When Kamehameha died in 1819, Kalaimoku/Kalanimoku and his cousin Kaahumanu were the overseers of the Hawaiian Kingdom as well as being the kahu /caretakers of Liholiho/Kamehameha II, Nahienaena, and Kauikeaouli/Kamehameha III. Kalaimoku/Kalanimoku did marry Keopuolani, widow of Kamehameha and mother of the three. Kalaimoku/Kalanimoku's last wife was Akahi , our ancestor.
Thru genealogies, our families (and others who can document their genealogies as well) are and remain the legal heirs, successors of the Kamehameha's and King Lunalilo because he was a younger stepsibling of the Kamehameha's; heirs of King Kalakaua thru his two children: Kaopu (k) and Kamaka (w); and heirs/descendants of Queen Liliuokalani through her "child" Abigail/Princess Poomaikelani; and hanai "Kaaumoana" aka's.
As discovered in the court case of REX VS. Booth, which explains what the Hawaiian Government is, everyone born into the bloodlines are legally part of the permanent parts of the Hawaiian Government. Part 1 - Sovereign, his heirs, Part 2 - House of Nobles - their heirs = these parts were and remain permanent parts .....the last part is Part 3 - House of Representatives, a temporary, voted in group -----this is the group that dethroned Queen Liliuokalani in 1893....
Our family(ies) opposed Annexation -- Kue Petition
Our family (ies) opposed Statehood in 1959.
One of our family members answered the legal notice by the U.S. government and opposed Statehood - his name was Harold Abel Cathcart, a retired school principal, a Kamehameha descendant/heir - cousin of my great grandmother.
1995 - formed /reformed the Hawaiian Genealogy Society updated name: Hawaiian Genealogical Society which was started by great great grandmother Princess Poomaikelani during King Kalakaua's era.
1996 - filed a Lien on all the islands Document No. 96-177455 at the Bureau of Conveyances, Honolulu, Oahu with evidence of criminal malfeasance, genealogies, police report, etc. (281 pages)
2001 - Delivered a letter of regret to the Japanese Consulate for the criminal sinking of the EHIME MARU.
There's more.......... such as putting out tehe IOLANI - The Royal Hawk - news on the web, etc.
So, if you're looking for legal, lawful......it would be the Royal Families documented through genealogies, research, history, legal evidence.........not just anyone can call themselves King, Queen, be self appointed........and we maintain our and families, and kanaka maoli claims to lands as well........
as for Henry Noa's people....just keep your eyes on your leader....orhttps://www.youtube.com/watch?v=OXzZd5l-B9s

The following are the Permanent Members of the House of Nobles, the Second of the Three (3) part government. The First Part being Permanent Part: the Sovereign - the Kamehameha's Heirs and Successors, and the last Part - the Third part being the voted in, temporary part of the Hawaiian Government called the House of Representatives:

Konia - a Kamehameha descendant/heir who was the mother of Bernice Pauahi wrongfully claimed to be "the last of the Kamehameha's" by treasonous, conspirators; she was married to Abner Paki; siblings:  Pauahi(w), Hanuna, and Keola; her hanai daughter was Namakaeha/Kamakaeha/Liliuokalani/Queen Liliuokalani.

M. Kekuanaoa - Kamehameha's sister Kiilaweau descendant/heir who married Kamehameha's grand daughters:  Pauahi (w) and Kinau (w).  Because two of his wives were married to Kamehameha II - Liholiho, he became the step father of all of Kalaniopuu's, Kamehameha's, and Kaumualii's children, step children, and hanai/adopted children.

Pauahi (w) was married to Kamehameha II - Liholiho, His son Kahalaia, then M. Kekuanaoa.  She had Ruth Keelikolani (w).

C. Kanaina - last husband of Kekauluohi/Auhea who was married to Kamehameha; and Kamehameha II - Liholiho. He became the step father of all of Kalaniopuu's, Kamehameha's, and Kaumualii's children, step children, and hanai/adopted children.

Joani Ii - he was the hanai father of Kapehe (w); kahu hanai of alii.  Research incomplete.